Down on the sunny Mornington Peninsula in Victoria, is a company with a secret. Its an Worm Farm Waste System and the secret is the key to the World’s Best Worm Farm Septic Tank System that drives Sewage and Organic Waste Conversion. These days, as we become conscious of the damage we have done to our planet, it’s clear that we must adopt practices in our daily living which lessen the impact of our lifestyle on the environment. If we can do this without any inconvenience, then so much the better. This doesn’t happen so often though, does it. There’s a price for everything and we get nothing for nothing. But what if we could not only get something for nothing, but get big bonuses at the same time.

That would be worth talking about.

Well, here it is, and it’s from worms, would you believe.

The biggest emitter of carbon dioxide to the atmosphere is the soil of the earth – bigger than everything else combined – but it also has the capacity to be the biggest storage battery. 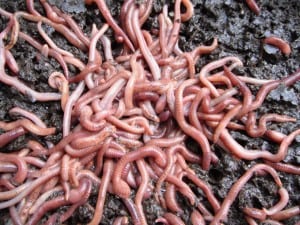 Around 200 years ago, and within a few years of each other, were two revolutions. The first was the Industrial Revolution and the second was the Agricultural Revolution. The Industrial Revolution saw factories and machinery needing so many workers that there were not enough farmers left to produce food by traditional farming practices. Then, good farming practice was to rotate crops and to fallow the land – allow it to rest for a season. Sometimes in that season a farmer would grow a crop of clover or potatoes, refurbishing the soil with nitrogen and organic matter (OM).

In those days, agricultural land contained OM of 20% and more. This meant many individual things needed to make plants of all sorts grow strong and healthy, but putting it into one, it made incredibly fertile soil.  That soil had very high carbon content.  Organic matter isn’t just vegetative matter though.  It includes micro animal life (that you can’t see) and macro animal life (that you can see).   Then the system was simply regarded as common sense. Now we call it “regenerative farming practice”.  Whatever the name, it doesn’t need chemical fertilisers to keep pumping out the sweet crops and pastures.

Because of the loss of workers to industry, farmers were forced to abandon fallowing and began to grow crops by monoculture methods – growing the same crop every year – and soon found they needed to add fertilisers.  The OM% in the soil was decreasing, and it wasn’t being replaced.  The source of that great fertility they used to have – the Biota – was dying.  The situation worsened when farmers began to believe in the NPK doctrine – that plants needed nothing more than Nitrogen, Potassium and Phosphorus. They began to pour those chemicals onto their land.

We know now that doctrine was (and is) wrong, but it has taken us around 200 years to learn it. During that 200 years the level of carbon dioxide (CO2) in the atmosphere has increased from around 250 parts per million (ppm) to the level today of 400 ppm. While that was going on the level of OM in the soil fell from over 20% to an average today of less than 1%. While the chemical fertilisers were pumping up the plants they were killing the magnificent, rich, Biota!   The soil had become lifeless.  The cure was worse than the disease!

A change to “regenerative farming practices” (which would see a return to high levels of soil OM) would reverse climate change in just 5 years” (https://www.facebook.com/regenerationinternational) Professor Alessandro Piccolo of the Università degli Studi di Napoli Federico 11, Italy teaches us that an increase in soil OM by only 5% to plough depth would lock 150 billion tonnes of CO2 into the soil.

Currently, the World makes around 18 billion tonnes more CO2 than is being absorbed each year. Therefore to stop the advance of global warming all we have to do in that year is lock away another 18 Billion tonnes of CO2. Better, and much quicker than relying on a return to “regenerative farming practices” to do this, is the A&A worm farm waste system. It is a very significant OM pump ! 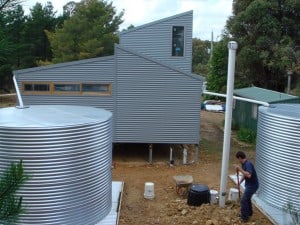 The worm farm septic tank system is simplicity itself.  All that happens is that the contents of the toilet, the water from the shower, bath, dishwasher, clothes washer are piped directly to a colony of active compost worms. You might look upon an individual worm as a harmless and unexciting type of creature.  You could be right, but it has a voracious appetite and it will eat at least half its weight daily. An active worm colony could weigh in at tonnes of living voracious appetite!  They live very closely together and compete for the available food.  They are also the world’s greatest sanitisers. Formidable!

The A&A worm farm waste system constantly introduces fresh air into the worm driven processing tank.  This design feature keeps the system aerobic (totally different to a septic tank, which is anaerobic).  The system is sweet with no smell!

The most appetising worm food is bacteria, and sewage is loaded with it – but of a type we don’t like – bacteria with names like e-coli, salmonella and enteric virus amongst many others. These nasties, released from our bodies and no longer in the environment in which they evolved, are very harmful to us. Compost worms will take these pathogenic bacteria in and pass them along their digestive tract. As they go, these nasties die off, and become vermicast of zero toxicity which is better than safe to use.

In an amazing example of synergy, worms draw their sustenance from destroyed pathogenic, aged and infirm bacteria and at the same time, provide an environment in which beneficial bacteria can flourish in huge numbers.  Worms are bacteria factories, but the only bacteria produced in those factories are the beneficial aerobic bacteria, and these produce antibiotics which kill off the nasties.

Because there is such huge dilution of the solid matter in the sewage with the flush water, shower, washing machine etc, the vermicast is broken down into extremely minute particles.  Vermicast is naturally black, and made into a solution of suspended solid, the solution is black – rich in carbon – and is discharged into the subsurface soil where it will do most good.  None is allowed to escape into the free environment.

Municipal Councils are spending sometimes as much as $200 a tonne to dispose of the organic wastes collected weekly from your home.  It goes to landfill, wrapped in the plastic bags we know so well where it will produce methane, a dangerous greenhouse gas, for hundreds of years to come !

If you have an A&A Worm Farm Waste System, all your organic waste such as weeds from the garden, scraps from the kitchen etc – the organic waste which your Council collects – go straight into the processing chamber never to be seen again and costs you and the Council nothing.

It is your very real brick in the wall for reversing climate change and it doesn’t cost extra. As of December 2015, there are more than 2250 families in Australia with a trouble-free worm farm waste system, all doing their bit to repair our environment and make it safe for our children. A&A trains and employs its own installation team and does not outsource the installation process. This ensures that your worm farm waste system will be installed right the first time and if any goes wrong they’ll fix the problem immediately.

The A&A Worm Farm Waste System is the World’s Best Practice, Fit, Flush and Forget sewage system.  Operational cost, fitted up to a 4 bedroom family home is around $20 per year, unless you include a small solar panel, in which case, it costs nothing and is all benefit.

Installation is about the same as any other system but to find out more, contact A&A Worm Farm Waste Systems on 03 5979 1877.   They’ll look after you !

This article was provided by David Murphy author of Organic Growing With Worms.